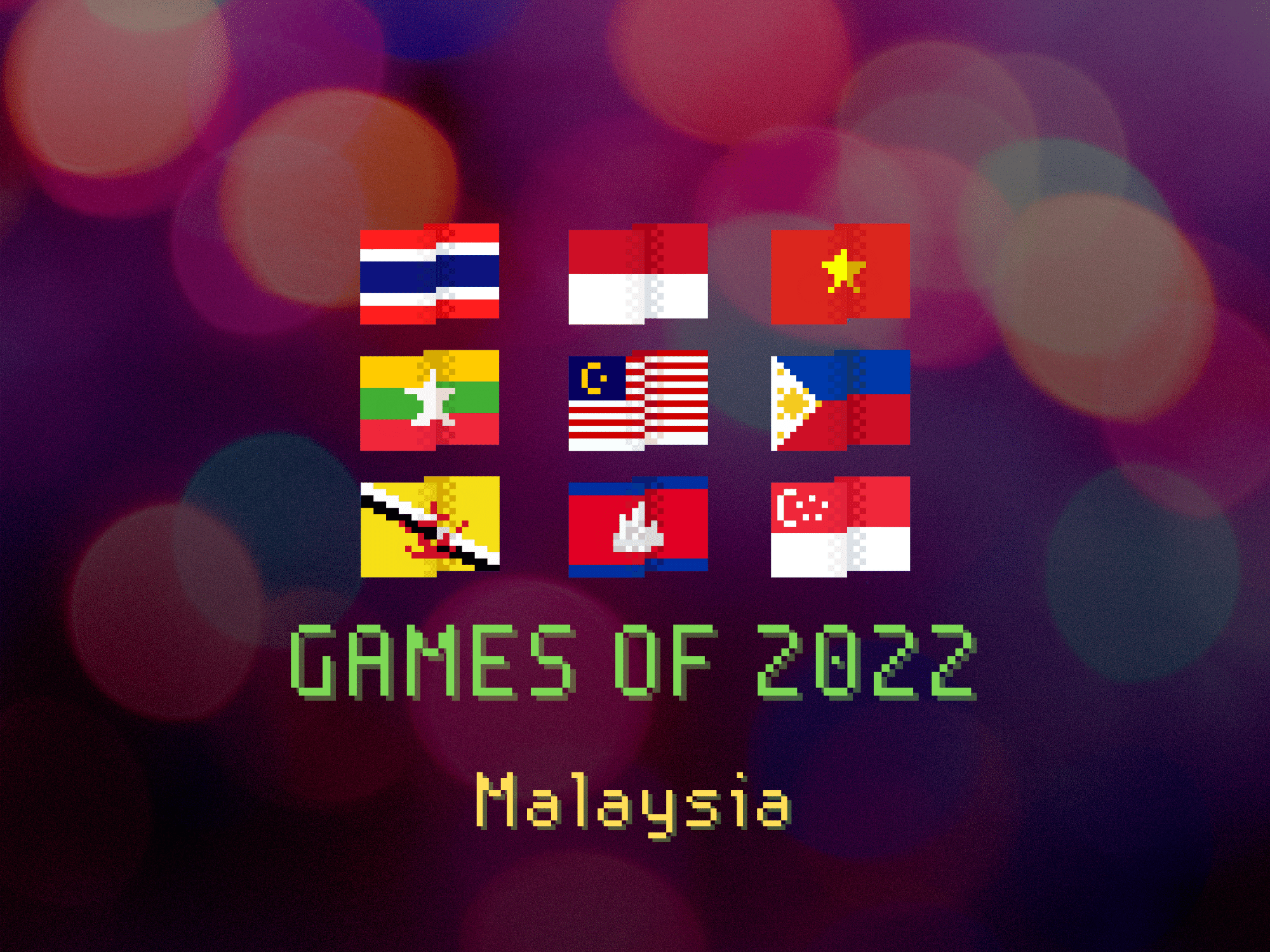 2022 is here, and with it comes a fresh load of new releases and upcoming games from Malaysia. Despite the pandemic, which undoubtedly has brought many struggles and setbacks to game developers all over the globe, we’re excited to see so many entries from Malaysia on this year’s list.

GigaBash is a multiplayer arena brawler that lets you slip into the oversized skins of gigantic kaiju to unleash chaos upon the world. Expect flashy special attacks, carnage, a roster of all the monsters and mechas your heart could desire — and even the revenge of “Kongkrete,” a living office building sick of getting destroyed by raging kaiju.

Passion Republic Games have updated GigaBash’s release date for both the PlayStation and PC version to early 2022, so we can expect to start our rampage soon.

Persona Theory Games, the studio that brought us Fires at Midnight, is back with Kabaret, a dark fantasy adventure steeped in dark mysticism and Southeast Asian folklore. Players slip into the role of Jebat, a human turned into a monster, and must travel to an unforgiving realm to break the curse. We’ll meet mythical beings, decipher tea leaves and hope to find Jebat’s lost humanity along the way.

Kabaret’s planned release is the first quarter of 2022. Lovers of visual novels featuring unique characters with interesting backstories can already try a demo on Steam.

At first glance, you could mistake Amnesiac Adventure for a typical fantasy game. You play a brave adventurer who has to conquer a dungeon for treasure and glory. But RoundTable Games Studio has a twist in store for us: Our hero is already almost at the end of his journey but can no longer recall how he made it this far. Players will have to work their way backwards through the dungeon and “unsolve” puzzles to uncover what happened.

Flow is an upcoming Android game that takes Bruce Lee’s philosophy to heart: Be water. By moving your phone, you can guide the water flow through various shapes and reveal invisible patterns brought to life with beautiful, watercolour-style graphics. Team Seed, the creative minds behind Flow, aim to combine philosophy, art and storytelling in this meditative-looking game.

While we’re waiting for the official release date, you can already try out the game on Team Seed’s website.

Shrines and temples are popular destinations in Japan, but they may not be the first thing coming to mind when thinking about escape rooms. Malice, a first-person puzzle game by Nimbus Games, wants to change that. Two tourists, who came to visit one of these shrines, take an unfortunate trip down a sinkhole and find themselves stuck in a long-forgotten mansion underground. Players will have to solve puzzles and elude a lingering, dark presence if they want to escape.

A demo of Malice is available on Itch.io. Once fully released, the game will also feature cooperative gameplay for two players.

Midwest 90: Rapid City by Hidden Chest Studio is an upcoming tycoon game of the unusual kind. Monsters may have overrun the world, but crafty restaurant owners make do. On the menu: monster meat! Between managing your restaurant and keeping it safe from nightly monster attacks, you’ll have your work cut out for you.

Hungry for more? You can wishlist Midwest 90: Rapid City on Steam. The exact release date is unknown as of now, but hopefully, we can expect this unusual diner simulation by the end of the year.

You may remember Hexlords: Quantum Warfare from last year’s list. The futuristic strategy game by Tantanmen Games and Aeonsparx Interactive has been in Early Access for iOS and Android devices for a while now, but 2022 may finally see its full release. The devs are still hard at work to improve every aspect of the game with regular updates.

But you don’t even have to wait for the full release to try the game. Head to the Early Access version, pick one of four factions and lead your forces into battle.

Zombie Soup by Aeonsparx Interactive is a long-anticipated top-down action shooter with neon-speckled retro flair and an abundance of charm. Formerly planned for 2020, the game’s new release date is 2022. Hopefully, we’ll finally see the full version of college student Ricky’s attempts to rescue a kidnapped girl from the brain-munching zombie masses. Until then, you can always head back to Itch.io and try a demo of the game.

There is some good news for fans of Re:Legend, the cute farming simulation by Magnus Games Studio. After some delays that made a full release for 2021 impossible, the game is currently in its final QA testing phase. If all goes well, 2022 will bring the eagerly awaited updates and breathe fresh life into the farms of Vokka island. New farmers don’t have to wait that long to get started, though, and can always check out the Early Access version on Steam.

Banzai Escape 2: Subterranean is a third-person action shooter by XenoAisam that picks up where its predecessor left off. Since entering its Early Access release last October, it has already introduced multiple improvements to the series, such as an online 2-player mode and customisable skins for the characters.

There’s no date for the full release yet, but XenoAisam is working hard to fill the game with new levels and content, and we can expect steady progress.

Rhythm Doctor by 7th Beat Games is another game that entered Early Access last year and has also entered many hearts since then. Because in this rhythm game, you can only save your patients by perfectly matching your defibrillation attempts to every 7th heartbeat.

2021 has already brought many updates to the game, such as Steam Workshop-enabled custom levels. Perhaps 2022 will bring us the full release?

Kaigan Games are at it again ━ Simulacra 3 is coming! After last year’s release of Doctor Who: The Lonely Assassins, the studio has returned to developing another sequel to its own critically acclaimed found-phone horror series. There’s no release date yet, but the devs have posted some game teasers on Twitter. In view of the sparse information available, however, it may well be that Simulacra 3 will not be released until next year or later. For this year we are hoping for more details about the game!

“Yes, we make games that will make you cry.” That is how the young studio Twilight Foundry Games introduces itself on Twitter. The studio’s first game, Sunset Satellite, looks as if it might just deliver on that promise. The game accompanies Nello, a disillusioned gig worker hired to walk a talkative dog around a pandemic-struck town. It’s perhaps too early for a release date yet, but you can already try the atmospheric game on Itch.io.

In this top-down dungeon-crawling puzzle game by Hafiz Mohd Rozlan, the spear is our heroine’s greatest weapon and obstacle at the same time. Confined to 4-directional movement in tiny spaces, players have to position the spear just right to stab enemies while avoiding getting it stuck in a wall.

Initially scheduled for 2021, the game has run into some delays. On the other hand, it has received a lot of new content since then. Or, in other words, more cramped rooms of death. The game’s Steam page doesn’t list a release date yet, but the year is still young, and “coming soon” seems to hint at a release in 2022.

The games industry in Malaysia has been quite busy, and there are even more games in development than we’ve covered here. There’s Gai & The Zodiacs, a Metroidvania game about Chinese Zodiac animals featuring charming pixel art, developed by Spideypeanut. Never Ending Beyond by One More Dream Studios, the makers of Ageless is an animal petting Roguelite scheduled for its PC release later this year. Hunter A Hunter by RAgent turns the principles of Pacman into a terrifying horror game.

Beyond 2022, we can look forward to even more games from Malaysia. Persona Theory Games additionally to Kabaret mentioned above, are developing The Lonely Hearts Petshop ━ , a visual novel where talking cats are looking for the perfect pet humans. Metronomik, who brought us No Straight Roads, are working on their next project, Ondeh Ondeh. Like No Straight Roads, Ondeh Ondeh will be audio-centric, but it’ll lead us into a colourful, storybook-like world filled with Malaysian culture. Nerdook, who just released The Magister last year, is working on Rogue AI Simulator, a sequel to one of his best-known Flash games, tempting us to turn a peaceful AI against humans to achieve its objective. Determinant is an upcoming post-apocalyptic physics-based survival game by Khor Chin Heong still early in development. And, last but not least, Endura, the ambitious action delivery adventure game by IFiO Studio, shows off fast-paced gameplay in its reveal trailer.

This concludes our list of most-wanted games for 2022 from Malaysia. To get another glimpse of what we await for 2022 from Southeast Asia, please check out our (upcoming) lists for Brunei, Cambodia, Myanmar, the Philippines, Singapore, Thailand, Vietnam, and Indonesia. Enjoy!

Southeast Asia’s indie developers shine at gamescom asia 2022
X
We use cookies to ensure that we give you the best experience on our website. If you continue to use this site we will assume that you are happy with it.Accept All CookiesDeclinePrivacy policy