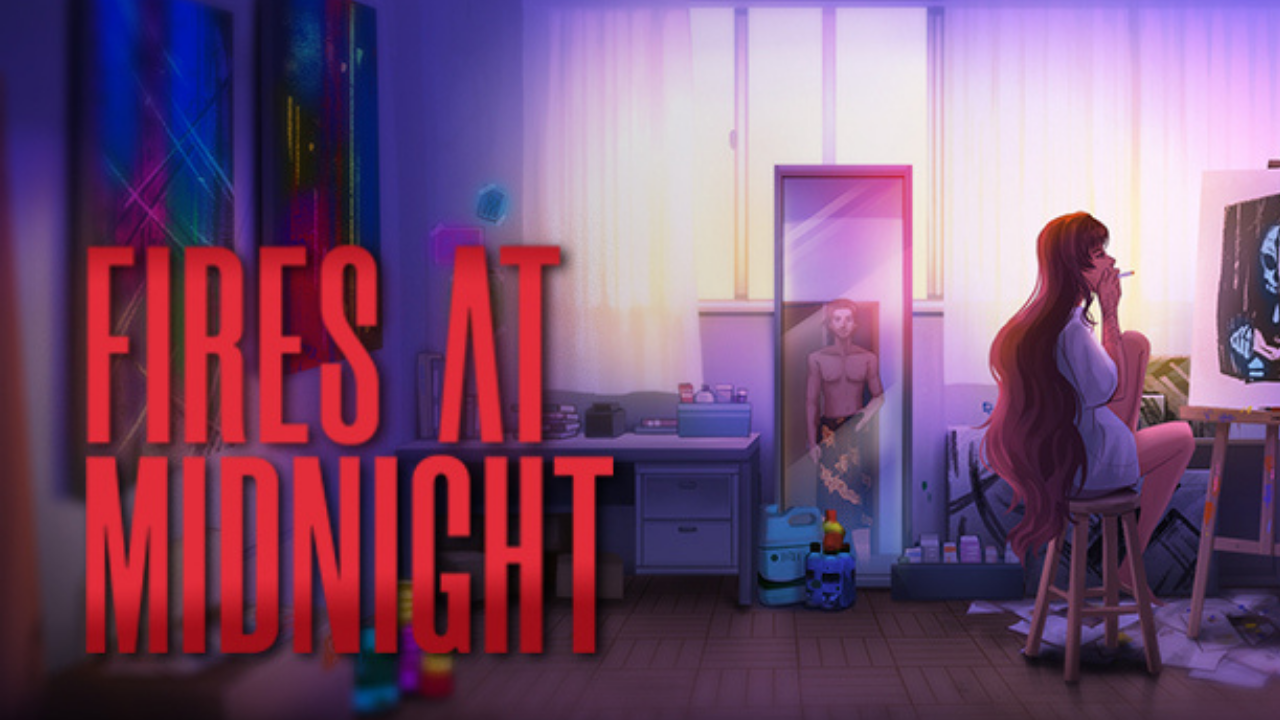 Imagine living in a world where people who have sex without loving each other go up in flames. What will happen to our relationships? The narrative adventure Fires At Midnight gets to the bottom of this question and sends us through a thrilling fever dream in the life of a young couple against the backdrop of the turn of the millennium in Malaysia.

Fires At Midnight tells its story as a fragmented retrospective: We experience the beginning from the perspective of Yun, a young photographer who lives in a couple relationship with Chitra. Using loose story fragments, we try to reconstruct what became of their relationship by searching a PC’s desktop, playing mini-games and designing a photo book. These elements function as memory anchors that trigger certain situations from Yun and Chintra’s past.

The memories, all happening shortly before the end of 1999, function like scenes in visual novels with conversations, decisions to be made and where small interactions with the environment take place. While the gameplay is limited to the most necessary, the story and the audio-visual design are the main focus at Fires At Midnight.

We experience this roller coaster ride of emotions not only from Yun’s perspective but can also watch scenes from Chitra’s side. This change of perspective gives us very intimate insights into the lives of the two protagonists and little by little we learn more about love, lust, trust, everyday life and their mental health. We don’t want to reveal too much here, but Fires At Midnight creates one of the most believable portrayals of a love relationship we’ve ever seen in a video game, especially with its eye for details.

Speaking of which, Fires At Midnight has to be seen – and above all listened to! Each screen is a small graphic masterpiece, beautifully drawn and full of small details and minimalist animations. The so-called “second layer” visualizes the perspective of our counterpart and adds little visualized dream-like comments on what we see on screen. This is supported by a solid soundscape and a fantastic soundtrack, recorded by the Malaysian bands Golden Mammoth and mutesite.

It is exciting how Fires At Midnight cleverly combines a fictional scenario with historical and cultural events. Malaysia, at the end of 1999, is on the verge of the new millennium. The country’s economic upswing was recently slowed down by the catastrophic consequences of the Asian financial crisis, politics are dominated by conservative forces, and religious and ethnic tensions continue to exist. Although these elements are not explicitly taken up in the game, there are some references, such as in a newspaper. Times of crisis like this mean uncertainty and this is reflected in the relationship between Chitra and Yun.

At this point a warning: Fires At Midnight deals relentlessly and graphically explicitly with the topics of violence in relationships, sexual violence, depression and drug use. This is important for the development of the story and the game knows how to use it properly, but we still think it is important to point it out.

Our conclusion for Fires At Midnight is consistently positive: We have rarely seen such a gripping and at the same time disturbing love story: The game really sucked us up with its 90s atmosphere and we always wanted to learn more about Yun and Chitra. Fires At Midnight fulfills this desire by allowing us to choose different paths in several game runs, which culminate in three different story endings. Persona Theory Games takes storytelling to a new level through the use of fragmentation, audio-visual elements and playful mechanics- a real must-play for everyone who cherishes innovative narrative adventure games!

Fires at Midnight is available for PC on Steam or itch.io. This review is based on a free review copy provided by the developers.