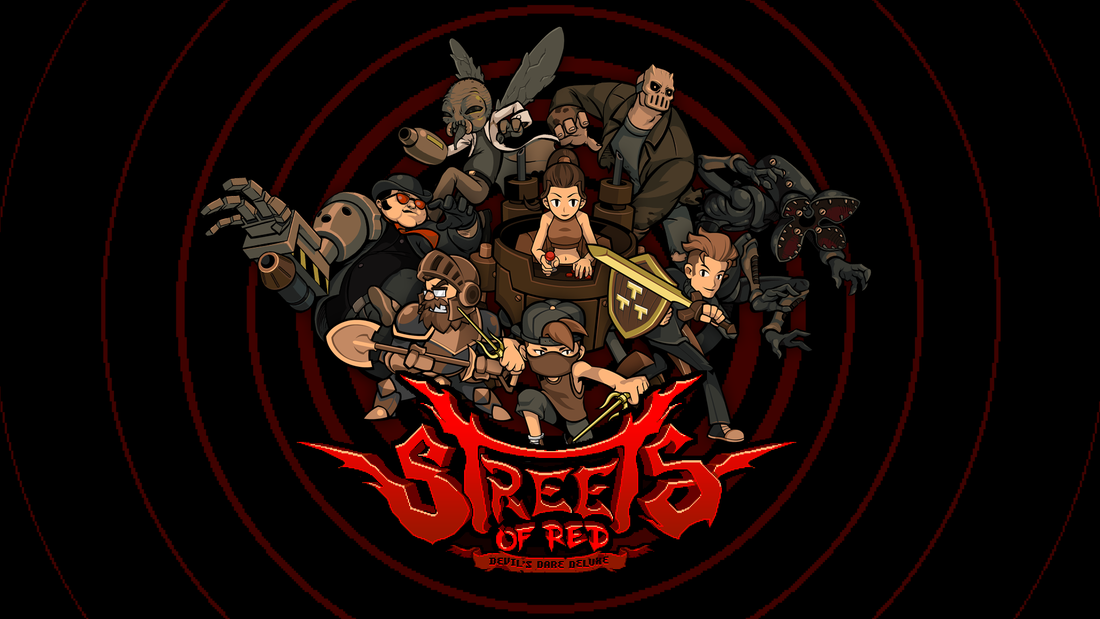 Usually, I can’t get easily hooked on brawler beat’em ups: I quickly get lost in overwhelming screen effects, can’t remember the right button combinations and high score hunting isn’t my thing at all. Also, back then the games used to be quite unforgiving: A small mistake later in the game and all progress was lost. So, at first it seemed like Streets of Red: DDD would be the same experience for me. The game’s world is overrun by apocalyptic monsters and players take control of one of six heroes to fight them back (two of them can be unlocked later in the game). Each character has a unique set of special moves, used to fight on a 2D plane from left to right through various levels until they reach each level’s final and sometimes screen filling boss encounter. Enemies drop food or money and their drop rate can be increased through chaining special attack combos and eliminating several foes at once. Food can be used to heal the character and money adds an interesting touch to the game. In-game cash symbolizes the coins players used in arcades to continue playing after a game over. To be less unforgiving, Streets of Red: DDD allows to use this money to buy “continues” after their on-screen death, making it possible to resume gaming. On the other hand, the game ends forever if the players run out of coins, resulting in the deletion of the savegame and requesting a complete restart of the game. As a result, being good at beating up zombies rewards players with a longer playtime, which is motivating instead of frustrating.

Streets of Red: DDD ads another motivating layer to the game: After each level, players can upgrade their characters with improved special moves, traits or just reward themselves some cash or continue tokens. Furthermore, the game can be played with up to four players simultaneously and it is needless to say that it gets even better in multiplayer as levels and monsters scale with the number of players participating.

Lucky for me, the game controls very smoothly, using only a few button combinations which makes them easy to remember. Within half an hour, I was able to unleash powerful combos and battle through hordes of zombies at once, creating an invigorating feeling of flow. The game is presented in a detailed retro style pixel aesthetic with an overemphasis on red pixels. Blood and body parts sprinkle the floor which is another reminiscence of classic gore horror but also makes the game clear no-go for younger players. Together with the 2D retro style visuals, the gameplay creates an easy-to-learn but hard-to-master beat’em up game in the spirit of arcade classics but with a modern touch that can even satisfy skeptics like me. I’m still not a fan of highscore hunting but if you have an itch for it, go and climb the game’s leaderboards by painting the streets red.

Streets of Red: Devil’s Dare Deluxe is available on PlayStation 4 and Nintendo Switch. It is an updated and remastered version of Devil’s Dare 悪魔の挑戦 on Steam. This review is based on a free review copy for Nintendo Switch provided by developer Secret Base.