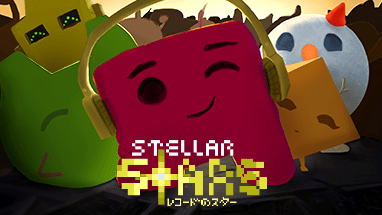 Stellar Stars has a lot of good things to offer. The typical thrill of rogue-like games where death is final. Fast paced jumping and fighting in a 2d sci-fi fantasy world. A catchy soundtrack. Cute characters in pixel graphics with unique skills and magical abilities. Various enemies and boss fights that require good tactics and sharp reflexes. Procedurally designed stages of increasing difficulty. Leaderboards and ranked seasons. A single player campaign. And the joy and fun to team up with three other players and go an a hunt for stars.

The multiplayer mode – although it is very fun – is the game’s biggest problem. Being the core element of the game there simply aren’t enough players online. Unless you find a friend for local play (yes, that still exists!) or private matches, you’ll mostly be staring at a never-ending search screen. Yes, there is a single player mode, but it mainly serves as a training mode. Although very small in size, Stellar Star’s community is very active and operates a Discord server to chat and find team mates.

Everything in this little indie gem is very well executed and developer Whitesponge is continuously updating and improving the game. They even provide free content with new characters. Once you team up with friends you get to play a light-hearted version of Binding of Isaac. Too bad the game hasn’t received the attention it deserves. I hope this review can change that and convince some of you to join the party. Stellar Stars is  available for Windows on Steam. I strongly recommend to use a controller.

Still not convinced? Check out some gameplay in this trailer: