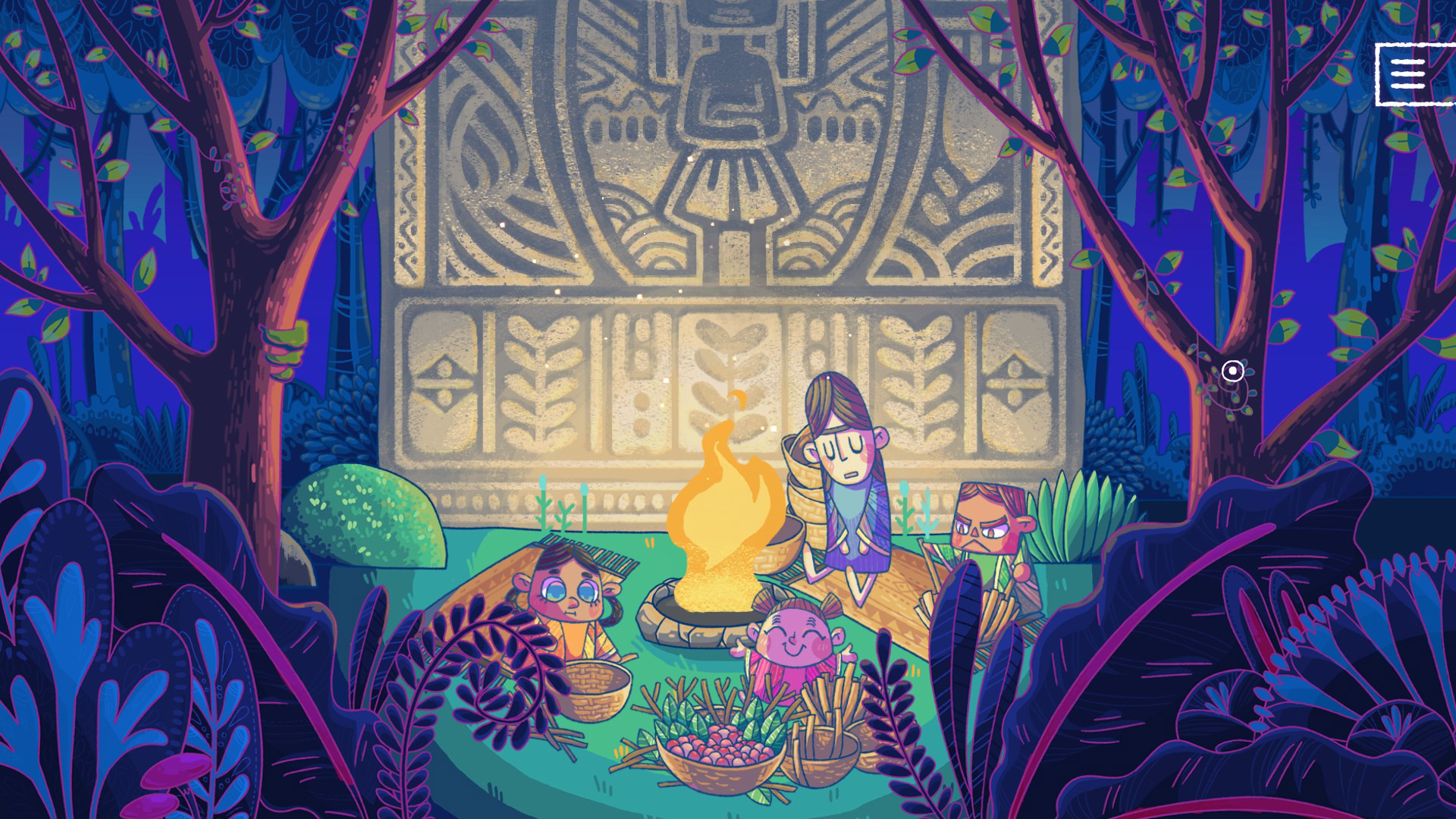 If you have been playing videogames for a while, you will undoubtedly encounter a certain fatigue either of recurring gameplay or – as in the author’s case – of uninspired recycling of settings, topics or locations. It seems like the videogames industry is repeatedly offering the same experiences inspired by either North American or Japanese cultures and regions. Here at Virtual SEA, we strongly believe that game developers from under-represented areas of world such as Southeast Asia can offer new and refreshing ideas to videogames. Can She & The LightBearer from Indonesian studio Mojiken satisfy this expectation?

The game starts with introducing us to a bunch of children, sitting in the jungle and preparing for the upcoming festival. We can see them arguing about it, not really knowing the purpose of it all. In comes the grandmother to tell them a tale and make them understand. In this story, Mother Nature, maker of the earth, has been sleeping for a long time, leaving the world in a state of danger and destruction by mysterious dark forces. The Light Bearer, a little firefly, is on its way into the forest to fulfill her destiny and awaken Mother Nature again.

She & The Light Bearer is a point & click adventure with heavy focus on story-telling while gameplay is a bit limited. Players control the firefly by clicking hotspots either by mouse or keyboard (both works perfectly fine) in colorful hand-drawn 2D environments. On her quest to re-awaken the Mother, she encounters other plants to talk to. They will act as guides, giving her directions and clues to the riddles. Those aren’t very difficult to solve as there are rarely more than five hotspots or items to interact with. While hardcore adventure players might be offended by the lack of challenge, we think that this light gameplay with low barriers reinforces the overall idea of the game, making the experience accessible for a wide range of players. Nevertheless, expect some of the later riddles to be a bit more challenging while never being unfair.

Two things make She & The Light Bearer a truly remarkable game and a model for masterly implementation of alternative settings in games. Let us first take a look at the amazing visual design. Dominated by vibrant colors and a deep inherent aesthetic, the game’s artist evokes a truly unique look, making each area of the game a painting of its own.

Art Director and Writer Brigitta Rena explains in the Pixel Sift podcast that apart from the movie “Song of the Sea”, she got heavily inspired by Indonesian fauna and that her art style represents the shapes and colors of this nature. Characters in the game are for example depictions of one of the largest flowers in the world, Rafflesia or the local pohon trinil (“Weeping Tree). When we see and interact with those plants, we can really feel them coming alive, having a character and impact on our world.

She & The Light Bearer has a message to tell. And it tells it in the most classical way: as a fairy tale. It is a lesson about the power of nature and about respecting the environment. It is a tale about traditions and mythology, based on Hinduism folklore from Indonesia depicting the idea of Ibu Pertiwi, the Mother of Nature and the Indonesian land. In times of growing environmental dangers due to human-made pollution, this is – despite its focus on “old stories”- a very recent and important topic.

She & The Light Bearer is a short game that can be finished in roughly two hours, it will never get you stuck to long and has a very light-hearted tone. The music is great, mixing traditional music with more modern elements, and you can even hear a song by Indonesian pop star Christabel Annora. With only minor flaws, such as the weird gibberish used as voices or slightly too long loading times between screens, and masterful visuals and story-telling, this game is truly a milestone in culturally-inspired game design. Especially, due to its perfect implementation of local cultural and natural elements. We can recommend this game to everyone, who wants to have a relaxed time, likes story-focused games and wants to experience a new and refreshing setting.

She & The Light Bearer is available for PC on Steam. This review is based on a free review copy provided by publisher Toge Productions.