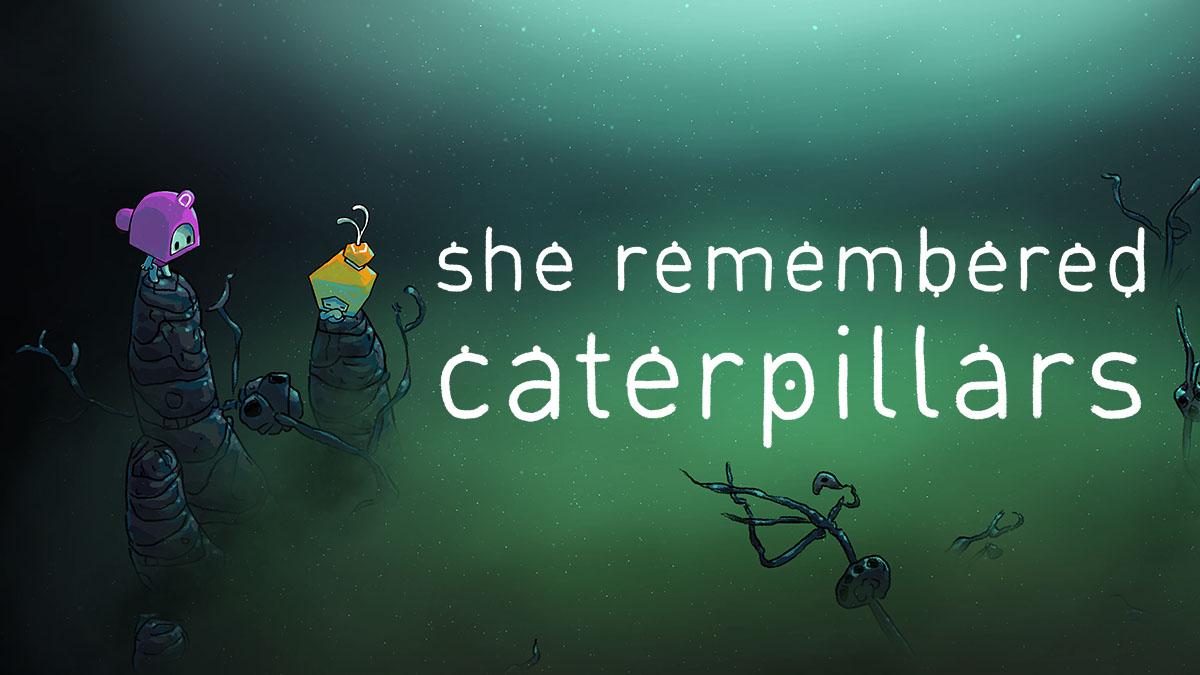 “Do you remember the caterpillars in the garden? They were green and small, and you said if we followed them, we’d find the sun.”

Transferring own biographies and emotional experiences into videogames has been a hit and miss so far. One of the challenges is to make the story fit with the gameplay. We can often discover a discrepancy between both parts, leaving the narrative and the interactive elements in dissonance. With “She Remembered Caterpillars”, we see another attempt to link the heartbreaking testimony of Malaysian writer Cassandra Khaw with a clever puzzle mechanic. Does it succeed to deliver a satisfying union?

“She Remembered Caterpillars” is in its core mechanic a simple yet challenging puzzle game. Players take control over small fungous creatures of various colors and forms. By moving them over a two-dimensional, board-like plane the goal in each level is to reach certain areas to make them “bloom” and fly away. On their way, the creatures encounter obstacles, reminding of caterpillars. These are gates that can only be passed by creatures of certain colors. This sounds confusing now, but the concept is easy to learn at the beginning. The game introduces more mechanics during the game such as merging colors, but the idea remains the same.

“And then at last, the Mother of Mold, the Hound of Nine Names, and the Quiet came to an agreement. The Mother would guard the earth and all the things that slept beneath the soil, the Hound the scarred plains and the heat-eaten mountains, and the Quiet would rule the places between breaths, the seconds between thoughts.
— 3:15 The Book of the Nine”

The game’s story is confusing at first too. Being only told in short statements or snippets before each level, it tells a story about life and death. Throughout the game, players will discover a philosophical approach to grief and letting go, told through a girl’s perspective and the reasoning with her father’s death.

“Is this what he wanted, or is it what you want?”

In “She Remembered Caterpillars”, gameplay and narrative follow different paths that seem unrelated at first. The gameplay is pleasing and becomes more and more complex throughout the game. It has moments of joy, relief and frustration, some caused by great puzzle design some by annoying flaws in the controls. The narrative is very mystifying at the begging and is rewarding in the sense that it becomes clearer throughout the game without ever being completely delivered. Although not very extensive, the small pieces of story are extremely well written, believable and emotionally loaded. It payed off to hire an experienced writer for the game, who brought some autobiographical elements into the story.

“You know what the problem with growing up is? Realizing that your parents were just humans.”

The mix between narrative and gameplay works because each of them reflects the game’s theme: coping with death. To realize this is challenging and implies to be attentive and to not lose track of the fragmented plot. Above all that, “She Remembered Caterpillars” is a visually stunning game with beautifully drawn and animated 2D backgrounds mixing dreamworlds and botany. This review is based on the Nintendo Switch version and we encountered two technical problems. The game works well overall but is quite small on large screens making it hard to distinguish details. Secondly, the controls are imprecise, making it hard to navigate and thus producing unwanted errors and frustration.

I can recommend “She Remembered Caterpillars” to patient players looking for challenging puzzles and an emotional story. It is a slow but rewarding game that raises interesting questions about life and death without being utterly depressing. It should be praised to deliver another successful approach in overcoming ludo-narrative dissonance in games.