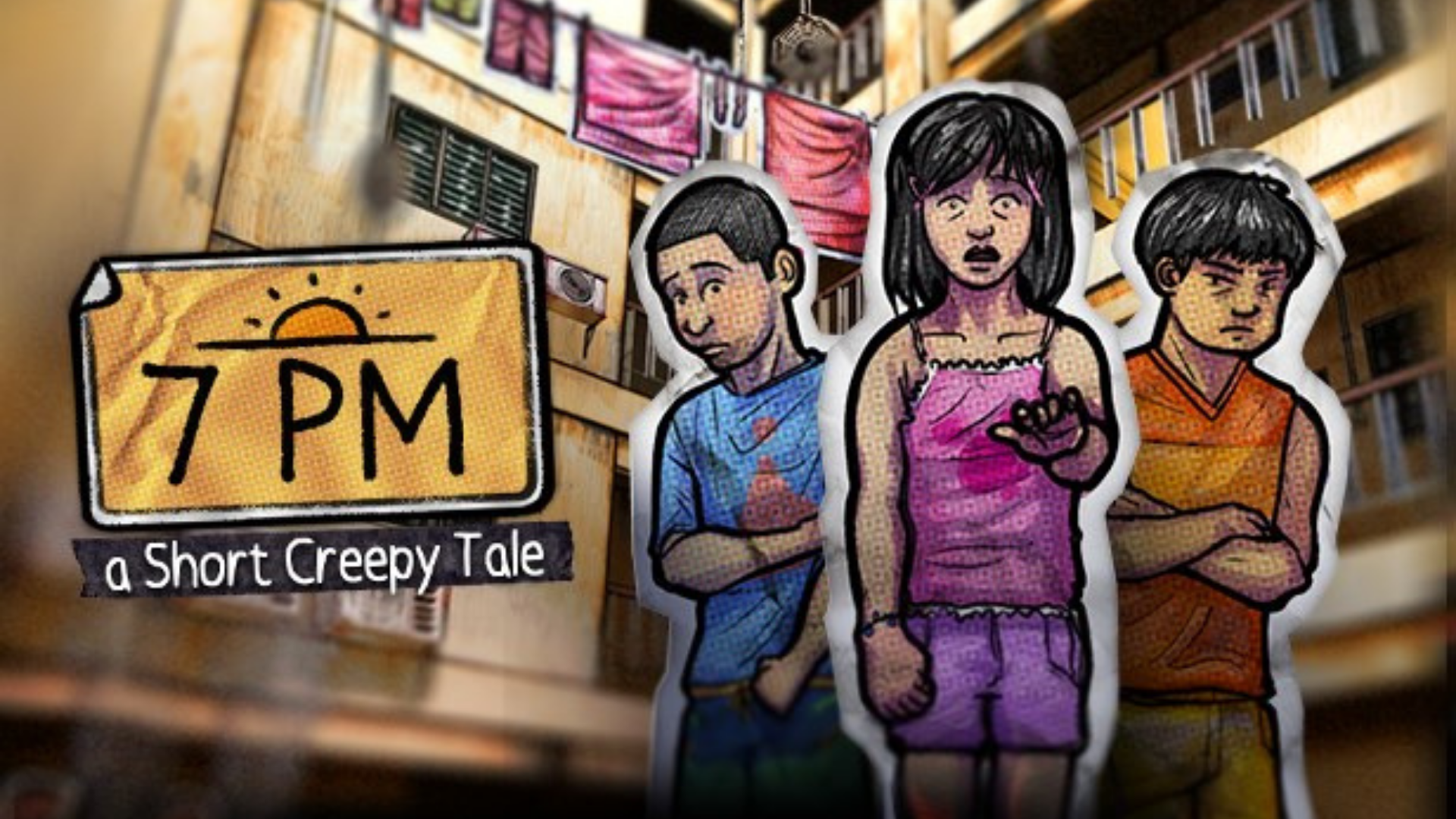 We particularly liked two aspects about Short Creepy Tales: 7PM: The setting and the visual design. In addition, 7PM is an exciting, albeit very short, horror adventure that shows the potential that lies dormant in games with unused scenarios and creative design decisions outside the mainstream.

Short Creepy Tales: 7PM takes several elements of the Malaysian cultures and thus creates a credible and refreshingly different setting. With the three children Wen, Lun, and Ming we explore a typical residential complex. An elderly lady’s story about a new child that has moved in recently plays a central role in the game’s narrative. It quickly becomes clear that there is a supernatural mystery happening here. 7PM cleverly interweaves the children’s imaginations with a Southeast Asian ghost story, blurring the boundaries of the mystical and the real world. The whole thing is embedded in a Malaysian everyday scene that is set around the Hungry Ghost Festival, which usually takes place at the end of the 7th lunar month. This scenario alone is so much more interesting than the uniformity that is presented to us in many other horror adventures. To a certain extent, the game even follows an educating approach: Malay and Chinese terms are explained in footnotes, religious rituals are described in conversations and at one point we even learn how to make the Malaysian national dish, Nasi Lemak. Anyone who has not yet had any contact with the setting will have no trouble following.

Visually, the game also stands out from the crowd of horror adventures. The developers chose a distinctive and extremely aesthetic paper cut style, in which all sets and figures look like they were made out of cardboard. A clever move! Not only does the game look fantastic, it also skillfully bypasses the problems that other 3D environments bring with them. Yes, that’s right: 7PM mixes three-dimensional levels with flat figures and environmental elements which enables players to be more immersed in what is happening in the game.

The name already gives it away: Short Creepy Tales: 7PM is a very short game. The story can be completed within around 45 minutes. However: Rarely have we spent such intensive three-quarters of an hour: Characters that instantly grow to our hearts, an environment that is worth exploring and holds exciting and also scary experiences, as well as a varied gameplay that continuously changes between dialogues, decisions and (easy) puzzles or action passages. The great strength of the game lies in its compactness and thus impressively demonstrates that it does not require any open world or repetitive gameplay mechanics to make a good game.

To a certain extent, 7PM feels like a proof of concept – and in our opinion it worked out perfectly. It also fits that the developers Cellar Vault Games are promoting the game as part of an anthology. So if it is successful, we may be looking forward to more scary stories from Malaysia! At this point there is nothing more to say than a huge recommendation for Short Creepy Tales: 7PM. The game shows that countless new scenarios, characters, and stories, especially in the Southeast Asian cultures, are just waiting to be discovered by the game scene. If you are into horror adventures and are open to new things, you should buy and play Short Creepy Tales: 7PM without hesitation!

Short Creepy Tales: 7PM is available for PC on Steam. This review is based on a free review copy kindly provided by the developers.