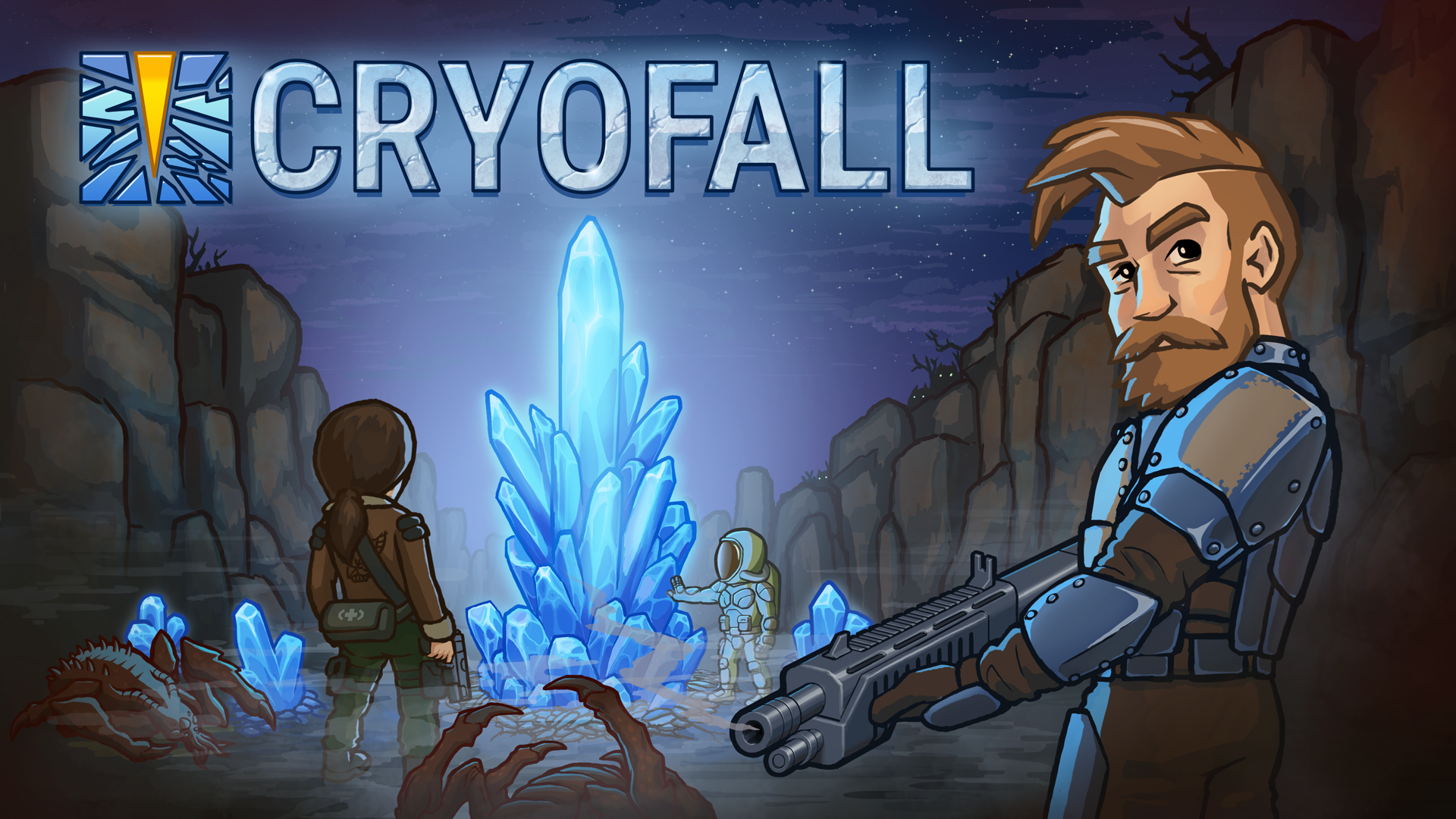 I log back into CryoFall, having spent two days away on important business. My land claim, the device that protects my base from falling into disrepair, is charred and smoking. There’s a hole in the wall where thieves have entered and raided all my belongings. They even stole my fridge. Later that night, a man with a torch waves at me from outside my wooden base. Having already lost my first base and all my loot from letting a stranger in, I pretend to be AFK. He leaves, I feel safe, and then I immediately die to a venomous snake bite when I leave to fetch some water. No, I did not reach my dropped stuff in time.

CryoFall is a 2D survival game by AtomicTorch Studio (Singapore) out on Early Access, where you and a few dozen other humans crash land into an alien world and attempt to rebuild civilization. The scope of this game is honestly quite impressive coming from the perspective of someone new to survival games. The Tech Tree alone goes from building simple campfires to rolling through the alien world in full on power armor toting sci-fi weaponry, and the game apparently boasts the ability to be able to form entire cities with a working currency. The latter part, I, unfortunately, have not yet seen, mostly due to the small number of players in the servers who all who haven’t exactly made efforts to be friendly.

You start out alone, unarmed, and yet surprisingly not naked even when your equipment screen says you lack any clothes. A quest tab appears on the right-hand side to teach you everything from the basics of survival to crafting a fridge, and it did a pretty good job by teaching me how to play the game while pacing my progress. As extra help, the game also offers plenty of tips on how to solve the quests, and even throws in a four-hour newbie protection bonus as well, discouraging other players from preying on you while you’re new to the game.

My problem, however, is that the pace of progress is just too slow. You can have a humble abode made of wood and a starter Tier 1 land claim up in a jiffy, but then everything afterward slows to a crawl. It takes a lot of resources in order to get any semblance of sustainability in your base, which means a water collector to drink from, a plot of land to farm with, and walls to keep the players and wildlife out. That alone means a lot of chopped trees, quite a few minerals mined, and a lot of foraged mushrooms and berries as you keep yourself fed and watered the whole time you build a base. That’s not counting all the different kinds of workbenches and furnaces you must build to reach that point, nor all the times you may lose your items from an unlucky death while gathering supplies. You may even lose your whole base once your newbie protection runs out and other players now realize your little wood hovel is now up for the looting.

It’s only once you take care of the essentials that you can finally, truly start exploring what the game has to offer. Yes, you still need to continuously run back to the same area filled with all the essential metals and minerals to build stuff with, yes this will take a lot of time, but now you can build armor and guns and the aforementioned refrigerators, exploring the world at your leisure! There’s a whole world out there to explore, and it’s all yours for the taking!

Except I, personally, really never got comfortable with the idea of going too far from my base. See, something I quickly discovered after my third login was that leaving your base unattended for any amount of time was just asking to be robbed. With offline raiding protection disabled in the Asian servers, I would often come back in to find that someone had raided all my supplies and busted up my workbenches, ruining the base I spent hours building. To make things worse, it appears your land claim loses HP the longer you’re offline, and repairing it takes resources. What that ended up doing was discouraging me from ever straying too far from the base, both in-game and in real life, as I was being punished for leaving it unguarded and punished for being offline for more than a whole day at a time.

This, along with the snail’s pace of progress I was making, made me feel somewhat resentful towards my base. This was supposed to be my grand hideout on an alien planet I’m having an adventure in, not a prison formed of my sunk-cost fallacy. I would repair, build, and improve it over the next few play sessions with a slightly grumpier attitude each time, until one time I got so sick of the familiar scenery that I ran East, not looking back. I immediately ran into this massive scorpion-like creature that was unlike anything else I’ve seen yet (mostly wolves, snakes, boars, and chickens; admittedly peculiar wildlife for an alien planet), that proceeded to blow my brains out with a mechanic I had never seen (psionic damage, which my pitiful wolf-bone helmet could not protect me from.) I ran all the way back to my base in fright, knowing I could never leave. Another player then strolled by, the owner of that massive stone fortress just over the top of my mining field. My base had been discovered, and they were not happy. Never mind never leaving, it was time to pack what I could and go.

To tell the truth, I have not gone back to CryoFall since. It’s a shame because for a while I was amazed at how I had to do just to be able to survive and I was impressed by how easy to learn and readable everything in the game was. At some point, however, it started to feel less like an engaging experience and more of a list of chores I had to keep grinding in order to not lose all the progress I had made to get here, all while punishing me for wanting to explore a little.

There is, however, one big caveat to my experience: I went through all of this alone. CryoFall allows you to play cooperatively by authorizing other players to use your land claims. And while I ignored PVE servers (because then what’s the point?), building a base in a PVP enabled server would certainly be a faster, less harrowing experience when done with a friend. The numerous amounts of downtime the game has when you do the repetitive task of gathering supplies won’t be nearly as monotonous when done with a friend, and the idea of leaving your base to explore the world is a lot less frightening when you know you’ve got a buddy to hold down the fort while you go poke the psionic scorpion with a big stick.

So, would I recommend CryoFall? As of right now, not yet. I feel like the game turns into a chore rather quickly with all the repetitive tasks it makes you do, and the oppressive nature of survival games can quickly make a grand base feel more like a prison with how much care and attention you have to give to it daily just to keep it from falling apart at the seams. The game’s scope and ambition are genuinely impressive for an indie game, and I did enjoy the first few hours that I played learning how to survive. If AtomicTorch could implement changes to make the rest of the game’s progression after building the initial base does not feel so draggy, then I would be much more inclined to continue playing it and recommend others play it too. Until then, you might want to bring along a friend or two to make the experience far less lonely.

Unless of course, they happen to secretly be the rat bastard who’s been raiding your fridge.

CryoFall is available on Steam for Windows PCs (Early Access). This review is based on a free review copy provided by publisher Daedalic Entertainment.