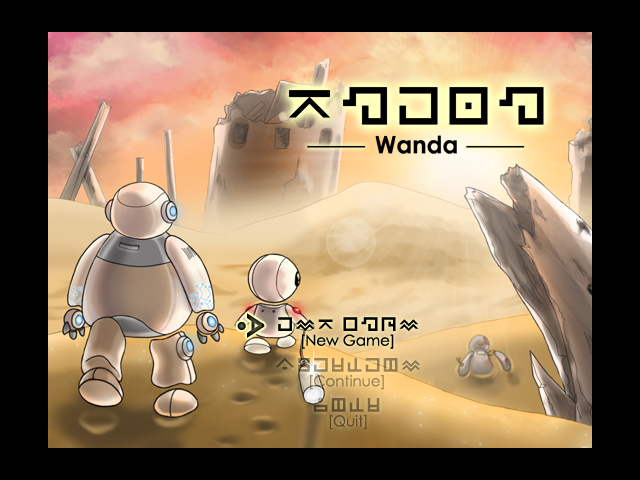 Wanda is the first major game published on PC via Steam by Kodots Games, an indie developer from Myanmar. This country in the northern part of Southeast Asia was ruled by a military junta for the last decades and some of my readers might be familiar with Aung San Suu Kyi’s struggle for democracy during this period. Because of this difficult political situation, the country was closed for most outsiders making something as banal as game development a wishful thinking. I was therefore exceptionally curious about one of the first major releases from this country after the opening of the country in 2010.

In Wanda players control a nameless robot who wakes up in some sort of cryo chamber in a post-apocalyptic world. The game does not bother the players with any kind of explanation. Instead of making a long introduction, the story is told alongside the player’s journey with the robot. Gameplay in Wanda is extremely basic and can be summarized in three parts: exploration, cutscenes and puzzles. Players guide the little robot through this torn and alien world and can find hints that explain what happened there. It soon becomes clear that it was the home world of robots. These exploration phases are often interrupted by in-game cutscenes in which the robot comments on robot corpses or dangers he encounters along the way. The game offers five different puzzles that range from pushing stones to a laser labyrinth. These puzzles vary in difficulty and as you can see in this videos, I already had some troubles with the first one:

Lucky for players like me, it is possible to skip the unforgiving puzzles and simply enjoy the story. Once I got past those puzzles, I could dig deeper into Wanda’s interesting world and due to the fact that the game doesn’t explain much, I started to make my own assumptions about Wanda’s background. The robot’s awakening in this unfamiliar world could be interpreted as the game developer’s first steps in a global game market. As the story unfolds, one might even draw some connections to Myanmar’s troubled history. But most of this is mere speculation and the game is in fact more a story about two cute robots developing friendship in difficult times than a commentary on Myanmar’s politics.

I enjoyed playing Wanda because of the overall game atmosphere and the game’s art. Lovely hand drawn surroundings and a decent soundtrack kept me going on even if the puzzles were quite frustrating. I can recommend Wanda to players who like story rich games with atmosphere and challenging puzzles but don’t want to mess around with complex controls or fast paced action. Furthermore, it’s an interesting contribution to Southeast Asia’s gaming scene.

Full disclosure: This article is based on a free review key from Kodots Games that I thankfully received upon request. You can purchase the game on Steam for 9.99 $/€.