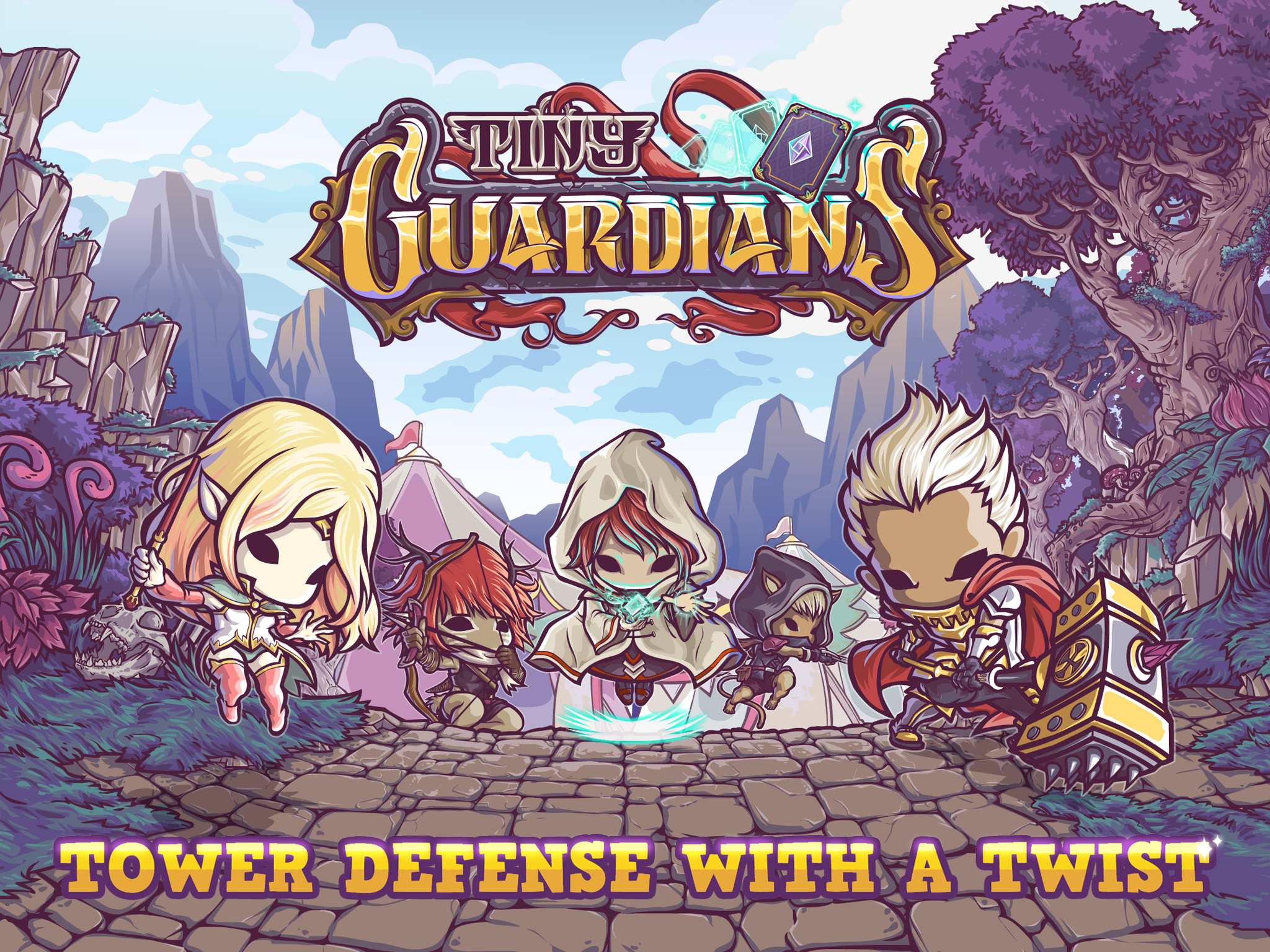 Today’s review is going to be a little different from usual, so brace yourselves for the first guest post to be featured on this blog! Let me quickly introduce myself first. I’m Luna, a fellow game enthusiast who used to go to university with Andreas, and I’m here today to tell you about all about Tiny Guardians. This little gem of a game was made by the Malaysia-based indie developers Kurechii, and, although none of their other games have been shown here yet, they published a few of them already. Kurechii is a small studio, listing only four members on their website. We already know that a lot of Southeast Asian developers focus on the mobile market, but beyond that, Kurechii also made a bunch of browser games. They all feature vivid colours and a very adorable art style. For now though, let’s focus on Tiny Guardians – a tower defence game without towers.

In this game you play as Lunalie the summoner, who wakes up one day to find her master gone. Lunalie packs her magic book and summoning cards and starts her quest to find the missing Sorceress. However, her path is blocked by all kinds of opposing forces, from wolves and bandits, to hordes of trolls and strange circus creatures. To protect her, the player must use the cards she carries to summon units who will fight for Lunalie. In time, she can also learn a set of spells to aid their efforts. The gameplay sounds simple enough, right? Wrong.

One of the game’s greatest strengths is that it can be enjoyable for beginners and seasoned players alike. It comes with three difficulty settings that can be adjusted before each level, and special quests posted in the local tavern for anyone who seeks an even greater challenge. You can also unlock an endless mode, for those of us who just never get enough of fighting weird circus folk.

There are 12 types of guardians you can summon, some of which get unlocked while you progress through the story, and others earned by completing a lot of quests.  Although the game can be completed without them, you’re definitely going to want those unlockables, as they’re arguably the best units and will make your life much easier. And don’t you want to collect them all? I sure did. Additionally, upgrades for the classes and level ups for individual units give the game some RPG-like elements. Simply summoning your helpers is not enough to stay alive though, as I’ve learned the hard way – that is where the game’s strategy aspects come in. As you can see, Tiny Guardians is quite unique for a tower defence game.

Sadly, I did have some problems with the gameplay. Originally released for Android and iOS, I’ve played Tiny Guardians only as a PC-port, and the issues I had seem to come from there. The controls are simple; you mostly use the mouse to drag and drop units, spells, everything – which can make your actions very slow. Strategically placing and moving your guardians is a big part of the game, so this was quite daunting at times, especially when playing in hard mode. Some of the bosses are very fast in bombarding you and your units, and these badly adjusted PC controls do a great job at getting you killed regardless of skill level. The story also seems pretty short, which makes sense for a mobile game mostly focused on mechanics. For the PC though, it’s just not enough content. A shame, as especially the fantasy setting has so much potential to build on.

Nevertheless, Tiny Guardians is a lot of fun and quite addictive once you get the hang of it. The ending also hints at a sequel, so maybe we’ll see more of the storyline if Kurechii does decide to make it. Although I do hope that for a future title they’ll start testing the waters outside the mobile market and browser games, as the studio obviously has a lot of talent and great ideas to share. Who knows, maybe in time they’ll bless us with a game based on Malaysian myths and legends? That would certainly be something to look forward to. Malaysian Developer’s Latest Game: Rogue AI Simulator – Will You Choose to be a Benevolent Scientist or a Ruthless Dictator?