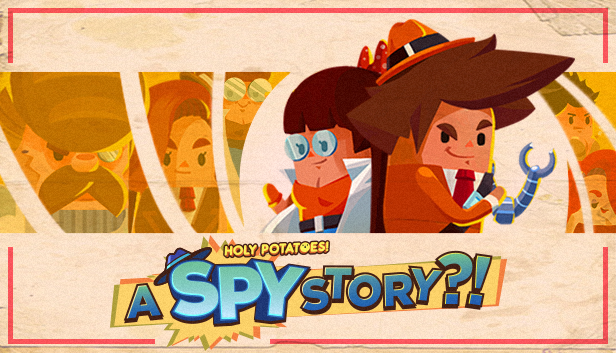 Holy Potatoes! A Spy Story?! Is already the fourth installment in this humorous management simulation series developed by Daylight Studios from Singapore. It is about time to check out what this is all about and if this newest entry is worth dipping into the Holy Potatoes universe.

The game’s story unfolds as twin potatoes Ren and Rexa want to find out about their parents who mysteriously disappeared. To do this, they open a spy agency and whoops… there we are in the game, overseeing the management of this agency. One might find this a bit of a constructed opening and to be honest, the game doesn’t even try to tell a serious story even through a lot of effort seems to have been put into it considering the length of the tale. It is still only a loose lining to introduce new gameplay elements that consist mainly of dialogues in 2D panels with lots of jokes, slapstick and puns revolving around pop culture. Humor is often a matter of taste but for us it didn’t work out and we gladfully accepted the in-build skipping function to concentrate the actual gameplay.

Managing the agency is the part of the game we liked much more. Players can hire a variety of potato spies with specializations. Following the game’s humor, the characters bear names such as Danilo Glover or Jamal Bond. Spies are categorized in classes such as charmer, fighter, thief, analyst or marksman defining their skills and unique abilities. Each spy has four stats: fight, trick, avoid and charm and special skills such as wink or roundhouse kick. The idea is to send your agents onto missions choosing the right character for the job. A mission consists of various obstacles such as doors or guards which can be overcome by matching its weaknesses with the agent’s strengths symbolized by the stats mentioned above. Later in the game, players can even choose to equip their agents with gadgets or vehicles to help them accomplish their mission. Players can only influence the preparation phase as missions themselves develop automatically, symbolized by an animation on the lower left of the screen. The only options are to abort the mission, if danger seems to be too high, or small decisions about routes or detours. By accomplishing mission, we earn money and experience points. The latter is used to (automatically) increase the agent’s stats. Money is used to expand the spy base.

On a 2D isometric plane, we place training facilities, decorations and special buildings such as a decryption facility, a toy factory or a fashion yard. We need to make sure that all buildings are connected by roads so that our agents can reach them to upgrade their stats, build gadgets or decrypt data disks. The game’s focus is on micromanaging this system to optimize agents for their missions. This is a rewarding progression system that kept us playing much longer than we expected. Yet, the gameplay loop is that simple: send agents on missions, build facilities, train agents, build gadgets and then send them on missions again.

It mustn’t be hard to tell that we have mixed feelings about Holy Potatoes! A Spy Story?! On the pro side we can acknowledge the colorful and child-friendly presentation in simple yet surprisingly beautiful 2D scenes. It overall is a light-hearted take on the spy genre with a quick and motivating progression system which is the most entertaining part of the game. And then, we liked to puzzle and figure out to maximize training times and resources before entering new missions (mission have a timer in which the need to be accomplished).

Still, the game comes with some major let downs: As already mentioned, the story can be neglected, and the humor walks on the small path between trashy and stupid. Yet, the worst parts are the repetitive gameplay loops keeping us doing the same things repeatedly. We feel helpless to actively partake in the game: most things develop automatically. This would be fun it the game could at least better communicate its mechanics. We still couldn’t figure out how mission requirements and stats influence the success or failure of a mission, leaving the impression that we gameplay heavily relies on sheers luck and making the later game very frustrating especially on higher difficulty levels.

Why is the Holy Potatoes! Series so popular then? It seems to be a game for those who like a casual approach to management simulations and take deep satisfaction from progression systems. It might even help if the game serves your kind of humor. Just don’t expect a straightforward experience in terms of story-telling or gameplay mechanics. Holy Potatoes! A Spy Story?! Still isn’t an easy game despite its child-friendly looks. What looks like a simple and fun job turns out to be serious hard work. Just a as real spy’s life might be…

Holy Potatoes! A Spy Story?! is available for PC on Steam and GoG. This review is based on a free review copy provided by publisher Daedalic.