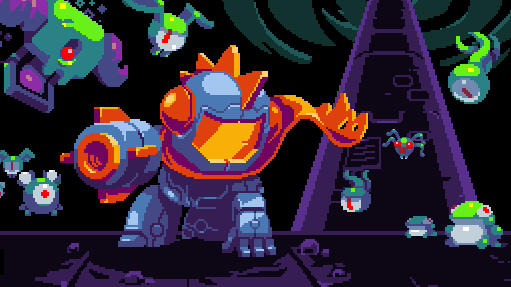 Every now and then a very promising game is released and is easily overlooked in the mass of releases towards the end of the year. Tower Fortress by Filipino game developer Keybol is such a hidden gem. With its generic name and the cartoonish 2D pixel look it could be easily seen as one of those quick and dirty indie publications that have flooded the market in recent years. But don’t be mistaken, Tower Fortress is a very addictive platformer that draws inspiration from the roguelike genre and classics such as Sonic the Hedgehog and Metroid.

The goal is simple: Climb to the top of the tower with your futuristic character. Wearing a combat suit, you must defeat various enemies and bosses on the way. The controls are simple too: You can jump to climb, double jump to enter rotation mode and shoot to kill your foes. While in rotation, the character becomes a swirling blade, dealing heavy damage. Guns are picked up on the way through loot crates and range from shotguns, and bubble guns to devastating lasers.

While the gameplay is easy to learn, it is quite challenging to master. On the way to the top, players must avoid deadly traps, collect shards and power ups while keeping up the combo counter. Once in such a flow, the game is very fast paced and does not forgive any mistakes: as usual in roguelikes, the game ends with the death of the character and requires a restart. There is some progression though. With collected shards, players can unlock a huge variety of new suits with different stats, each requiring a different playstyle.

Tower Fortress has a beautiful 2D pixel style using a colorful palette. The game runs smooth on every platform and is overall very polished, as we didn’t encounter any bugs.

It is a challenging game that will make you scream and laugh at the same time. Keeping up the combo meter gives you a very satisfying feeling of flow while you rush through enemy hordes and climb the tower at a fast pace. Every mistake instead will ditch you to the ground erasing all progress. With this game mechanic, we can just imagine impressive speedruns and competitions. If you are that kind of competitive gamer, we can highly recommend Tower Fortress!

A few last words about the two versions of the game. Tower Fortress was released on Steam and mobile platforms. The PC version is much easier and accessible due to more responsive controls. On Android and iOS, those lack precision and are more complicated to master. Both mobile versions are free to play, involving ads between levels and the possibility to be revived after death for watching a video or paying shards. This is not game breaking, but this free revive feels a bit like cheating the competition in comparison with the Steam version. Other than that, both version share the same content and gameplay. We recommend the Steam version, as it delivers an overall more satisfying experience.

Tower Fortress is available on Steam and Android / iOS.