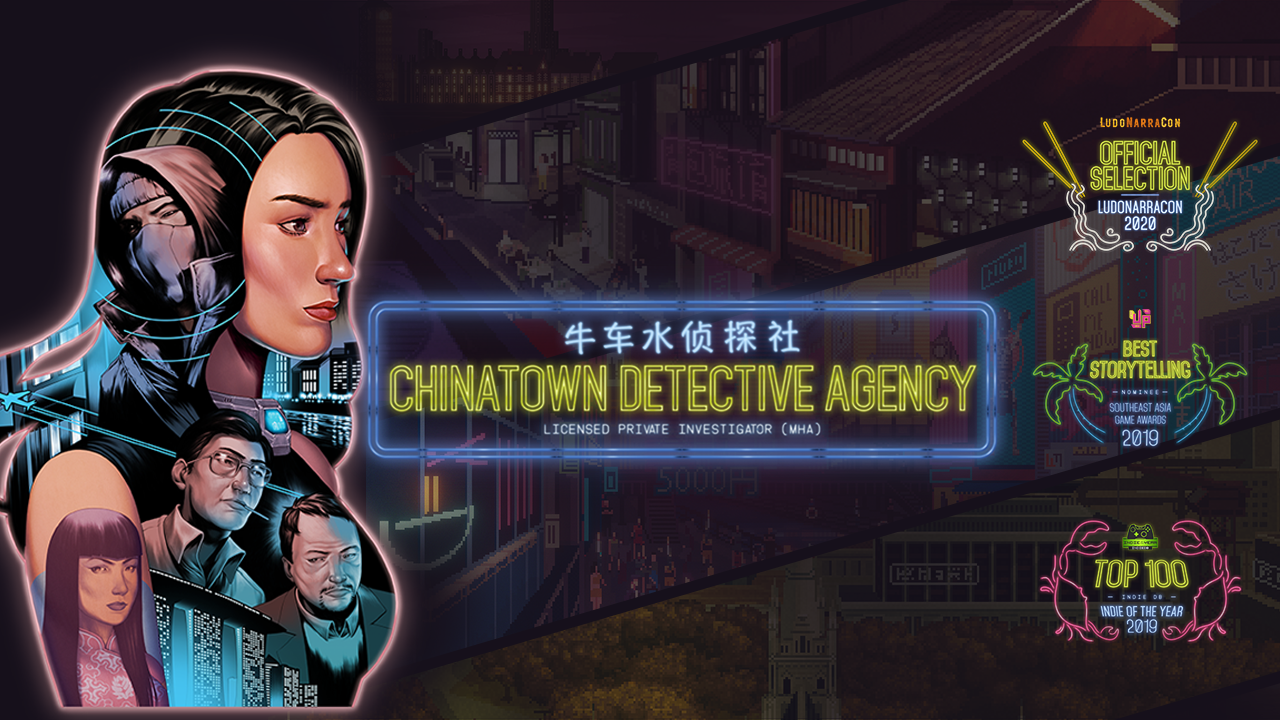 In their childhood days, who hasn’t dreamed of traveling the world as a super detective and chasing bad guys? It was the same with Mark Fillon of General Interactive from Singapore and his dream came true when he first played “Where in the world is Carmen Sandiego?” in the early 90s. Now, many years later, he would like to revive this feeling and create a spiritual successor with Chinatown Detective Agency and you can now support Mark and his international team with this project on Kickstarter. We took a closer look at the alpha demo of the game, so that you know what you’re getting into.

In the futuristic neon Singapore of 2032, we take on the role of private investigator Amira Darma, a former police officer, and investigate our first case. We immediately catch the eye of the chic pixel style that successfully captures the dark atmosphere. The game’s visuals are framed by button panels, making it all the more reminiscent of classic adventure times. The demo gives a first impression of the story and interactive elements of the game. So we move through the 2D environments with point & click controls and solve more or less tricky puzzles. It is interesting to see how much faith the developers have in our investigative skills: Although there is a basic tutorial, Chinatown Detective Agency does not take us by the hand in solving the puzzles. At one point we even have to research information from the “real world” – if we don’t already know the answer, of course. This element will surely delight everyone for whom adventures have become too simple recently.

In the demo, we visit several locations in Singapore, which we can reach freely on a map using the MRT. These include the eponymous Chinatown, the Geylang district or the Botanical Gardens. Towards the end of the demo, we can also try another feature: we have to book and pay for the flight to London ourselves. This is of course not a problem in the demo, but in the finished game this element is part of the announced but not yet playable management part.

The developers have big plans: In addition to the adventure part and the management of the agency in real time, the story wants to win our hearts with thrilling twists and voice-over dialogues. We are unsure whether the latter will apply to all characters in the game though, as we will be able to hire additional support from a large pool of detectives. The developers have already proven that they can deliver solid games with Terroir, a wine-making simulation, so the base is set for their next step.

The demo and the material we have seen already suggests that Chinatown Detective Agency can become a true and long-awaited highlight for hobby investigators and friends of classic adventure games. It’s not for nothing that we have already chosen the game as a hot favorite for 2020, and we will definitely follow the development of Chinatown Detective Agency; keeping you covered once it will be released on Steam. Interested gamers can already try out the demo themselves and, of course, support the project on Kickstarter from today.