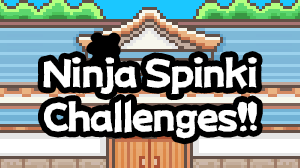 Do you remember Flappy Bird? This super challenging mobile game drove us crazy in 2013 and was unbelievably successful at the time. Now, the creator of the game Dong Nguyen partnered up with the Japanese publisher Obokaidem to release Ninja Spinki Chalenges!! a new mobile game for Android and iOS to test our ninja reflexes.

The goal of the game is to succeed in 30 ninja challenges of increasing difficulty. At first glance the game looks harmless and manageable. A cute little ninja must run around the screen and avoid obstacles such as bouncing cats, bombs, fruits or cannon balls. One other challenge is about throwing shuriken at enemies. Players need to survive every challenge for a certain amount of time. Of course, as Ninja you can almost run at light-speed which makes the game extremely fast. Early stages are fairly simple but later challenges with increased time limits and more obstacles will make you pretty desperate. An optional endless mode adds some variety to this otherwise very straightforward little game.

Ninja Spinki Challenges tries to follow Flappy Bird’s mixture of easy-to-learn gameplay with simple controls, cute graphics and a hard-to-master endgame. We will see if they can copy the success of this mega hit from Vietnam which became famous all over the world.