This time, we take a look at the most anticipated games coming from Thailand in 2021. Here are a bunch of games that you should keep an eye on next year.

Joojee’s Journey: The Journey of Friendship

The list starts off with a humble and lighthearted game: Joojee’s Journey: The Journey of Friendship is a puzzle-platformer, produced by QuantumPeaks and the Digital Innovative Design and Technology Center of Thammasat University. The game is based on the popular Thai webcomic Joojee and Friends, illustrated by Mindmelody. You’ll follow a rabbit called Joojee, who’s traveling around to recall the memories of its friends. Not all of these are good memories and those will be uncovered by solving mind-bending puzzles. So far, the exclusive gameplay parts we’ve seen show good progress and a release in 2021 seems realistic.

In Thailand Farming or Wildlage, the first game made by Starjelly Games, you can expect what the title already states. On the screenshots, the game reminds us of a Thai successor to the acclaimed indie farming game “Stardew Valley”. We look forward to seeing a mix of classic farming elements spiced up with elements from Thai culture and religion such as Buddhist pagodas and monks but also ghost and superstition. The story of the game takes place in the 90s. You will be playing the role of a young boy who just graduated from the capital and comes back to his family home. The title is still in development but the latest gameplay snippets are promising enough for a possible release by the end of 2021.

The powers of nature have a starring role in another anticipated title in 2021. Earth Atlantis 2, the successor of the positively reviewed game Earth Atlantis by Pixel Perfex, was announced shortly and is still in development. A first trailer shows huge progress in style and detail, which we already loved in the first game. As we haven’t seen any gameplay yet and a release date wasn’t announced by the developers, we are still hoping for a possible release in 2021.

With Krut: The Mythic Wings we will head to the heights of Garuda’s realm on mobile devices and PC. Your task is to fight a ruthless army in a world full of mystical creatures and magic. This 2D side-scrolling platformer – co-production of RESU Horizon, Good Job Multimedia, and Pixel Perfex –  is based on a CGI animated movie called “Krut: The Himmaphan Warriors” from 2018. A release was initially planned for 2020, but there is not much time left to keep that date. It looks like we have to wait until 2021.

And now, we climb even higher: Nimbus Infinity takes us up into space with its high-speed mecha action gameplay in the style of Zone of the Enders, a genre classic. The story will continue its predecessor “Project Nimbus” left off, but won’t unfold it in an episodic manner this time. You are sent to end a war about resources on Earth between the years 2099 and 2100, which led half of humanity to end up in space colonies. Luckily, as an elite pilot, you can use the game’s Battle Frame technology to bring back the balance. Nimbus Infinity will be released on Steam and possibly on PS4 and Switch just like the first game. Further information about the release date will be announced soon.

The next game covers a profession which both exists on Earth and in space: Being a bounty hunter and having a good fight in Bounty Brawl from Igloo Studio. What we know so far is that you can use several weapons and traps from a top-down perspective and that the game will be presented in cell-shading graphics. But, the game is still in development and the available footage is from June 2018. Possibly, the game is ready to be published in 2021 – but we have no reliable information up to now.

Let’s get back to some games with a more solid information base: PQube and FairPlay Studios will deliver us Fallen Knight for Nintendo Switch, PS4, Xbox One, and PC (Steam) to explore a sword-fighting-centered 2D side-scrolling action platformer. Style and story will mix futuristic aspects with the original Lancelot storyline of King Arthur’s tale. Players will take on the role of Lancelot the 49th who must save his city from an evil organization called The Purge. Sounds interesting? Be ready for some challenging levels with unforgiving, punishing bosses. The game will be released in the first quarter of 2021. Those with an suitable device can already play it on Apple Arcade.

For those who don’t like a futuristic fantasy tale, we got something more traditional in store. With Warhammer: Odyssey, 2021 will present us with a 3D mobile MMORPG for Android and iOS devices set in the highly popular Warhammer fantasy world. The game and story will develop and expand over regular episodic updates. The first updates on the character design and the reveal of further content look promising and we are excited how further details about the storyline will make this mobile game an enjoyable experience! Developer Virtual Realms announced to launch worldwide in January 2021.

Also, more on the traditional fantasy side is Vera – The Mystic Realm, a creature raising/ fighting RPG that emphasizes the connection between the player and the creature. It is focusing on the life-like qualities of each creature which might be important for the real-time battles. Until now, Silent Bark Games have not revealed a lot of information about the game, but nice character models and a gameplay trailer gives hope for the ongoing development; a date is still not mentioned yet. It is not clear if the game is published on Android only, as the trailer suggests

Once more, we take a look at an action game. Number Six is the current working title of a first-person shooter with VR Arcade elements by Ygg Game Collective and Ningbo Inception Media, which are well-known for their horror game series Home Sweet Home. With this title, the Ygg Game Collective might surprise us, because it’s not the typical genre we’ve seen from them before. A teaser trailer shows us an impressive fight against alien hordes, but we’re longing for more. Date and platforms unknown.

By the end of our list, we come to the most frightening games that will arrive in 2021. Surely, the Ygg Game Collective doesn’t disappoint and continues to expand the Home Sweet Home universe a bit more. With Home Sweet Home: Survive, the story will be more interactive by taking the well-known and loved characters from the series into an asymmetrical horror game for five players. One Specter is hunting four survivors in an arena-based in Hindrance, the dimension between the world of the living and the world of death. The gameplay approach catches up with the main feature of Dead by Daylight and gives it a bit of different seasoning, the one we already loved in our review of Home Sweet Home. We look forward to seeing how and when in 2021 we’ll be frightened by the boxcutter girl again!

With Blood Bunny: The Game our list turns a bit more to the darker side of games. In the second game from Quantumpeaks in cooperation with the Digital Innovative Design and Technology Center (DIDTC) in our list, a sweet little bunny goes mad and takes revenge. We’ll be playing this bunny on its journey, fighting with a lot – really, a lot –  of blood. The game was expected to be launched in mid-2019 and there might be a chance of delay until 2021. But the fresh gameplay trailer from November 2020 is promising and indicates a release pretty soon on Nintendo Switch.

Preta แดนมรณะ is our last game, but maybe the most mysterious one. After the announcement in May 2020, we are looking forward to getting some more information for this exciting horror survival adventure from a first-person perspective. Sadly, there is still no release date yet, but we know it is planned to be released for PC (Steam).

UPDATE: Into the Haze

Shortly after this article was completed, we received the message that another game from Thailand was announced. Survival shooter Into the Haze will enter the Early Access phase in January 2021. More information can be found in our preview article.

This is our list of most-wanted games for 2021 from Thailand. To get another glimpse of what we await for 2021 from Southeast Asia, have a look at our lists for Cambodia/Myanmar/Brunei, Singapore, Malaysia, Vietnam, the Philippines, and Indonesia. Enjoy!

Which games are you expecting the most for 2020? Have we forgotten a highlight? Let us know in the comments! 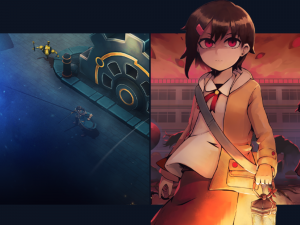 Thai studio Urnique Announces Timelie Spin-Off and New Survival Horror Game
X
We use cookies to ensure that we give you the best experience on our website. If you continue to use this site we will assume that you are happy with it.Accept All CookiesDecline