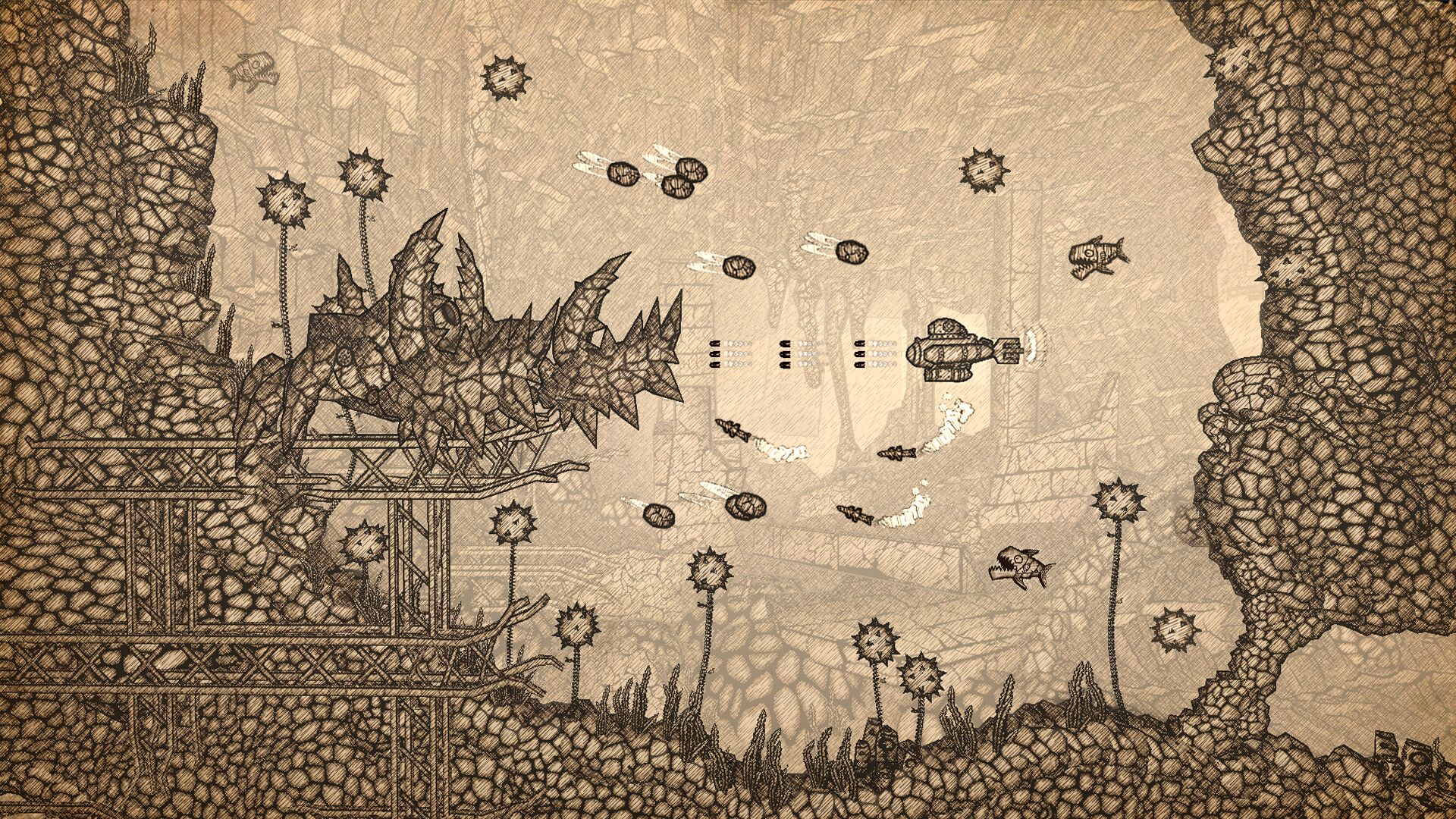 The world we know has suffered a terrible climate catastrophe. Our civilizations were flooded by masses of water and sunk beneath the oceans. Humans now live under water, fighting over scarce resources and are constantly endangered by pirates and vicious sea monsters.

This is the premise of Earth Atlantis delivered right at the beginning of the game. Players take control of a submarine and are thrown into this devastating world. At its core, Earth Atlantis is an arcade-style shoot ‘em up in which you explore under water areas in search for better weaponry and huge underwater creatures. The game’s focus is on boss battles with ever increasing difficulties. To fight those impressive monsters, it is necessary to develop quick reflexes and to acquire the right weapon. In traditional side-scrolling method, the submarine can be controlled in a 2D plane from left to right and up and down. By exploring the world and fighting smaller enemies, players can upgrade their subs and unlock powerful weapons.

So far, so well known. Nevertheless, Earth Atlantis has two outstanding elements. The first is its visual style. The whole game has a sketchy look, adapting the style of pencil drawings one may find in the sketchbooks of former time explorers. Combined with the setting inspired by Jules Verne stories, this brings in a unique look and atmosphere that fits great into the game’s devastating premise and its exploration aspect. The second outstanding elements of the game are the boss fights themselves. Despite the minimalist style, he developers from Pixel Perfex (Thailand) achieved to create terrifying underwater creatures which all require different tactics. Earth Atlantis has 25 boss monsters and 4 enemy ships to conquer, so plenty of stuff to do!

The game offers 4 ships to unlock and upgrade as well as a story mode and an “open-world” free roaming mode. It draws its fascination from the sheer need to conquer all the monsters and the progression system is motivating enough to keep it going. The game generally runs without flaws (we reviewed the Switch version). The only thing that caused us trouble was that orientation in the world could feel a little confusing because the sketchy elements of the graphics are sometimes overlapping, making passages hard to spot. With its demanding playstyle, Earth Atlantis is a game for those who like to be challenged by video games.

That is basically the game and tell you what: If you are looking for a challenge and 2D monster-hunting is your thing, you should check it out.

Earth Atlantis is available on Nintendo Switch, PlayStation 4, Xbox One and iOs.