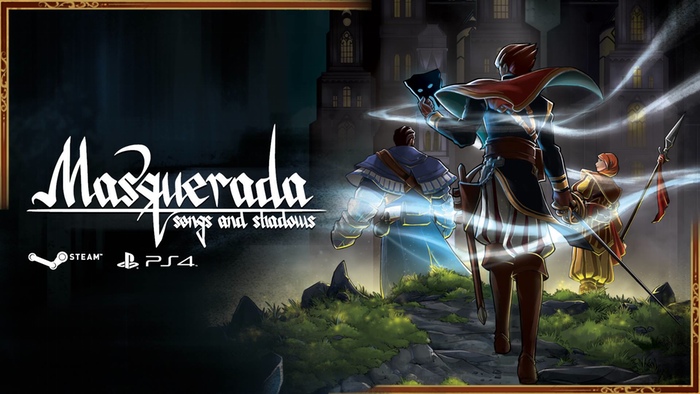 Young Cicero Gavar returns to this Venetian inspired Citte (pronounced: city) after years in exile. Being a former Inspettore of the Registry, he was summoned to lead the investigation to find his friend Razitof gone missing. Razitof was in charge of finding a solution to why the powerful magic masks of Ombre (Mascherines) have started disappearing. This is the beginning of a true detective story full of intrigue, friendship, betrayal and danger that does not fear to tackle spicy topics like homosexuality, prostitution, drugs or corruption.

The story is what makes Masquerada: Songs and Shadows an outstanding game. Witching Hour Studios managed to create a fantasy world that is at the same time believable and interesting. During the events of the game, Cicero meets lots of other characters, each of them being a member of Ombre’s different guilds and with their own back-stories. Most of the time, these stories are told in very well written dialogues or diary entries. After a while I grew really fond of characters like Kalden, a healer from the Mariner’s guild, or Amadea, the young historian with dark roots. Sometimes it even seemed like the writers did put more effort in crafting secondary characters than Cicero himself, whose motivation isn’t always very clear. Which is a shame because all dialogue and cut scenes in the game are fully voiced and the actors did a good job in bringing them to life.

After the story, Masquerada’s highlight is the musical score. Songs play an important part in the cultural history of Ombre and so the players can listen to some really beautiful opera choirs and very elegant chanting. Not often do game makers put such effort in their game’s audio design which is, in this case, perfectly interwoven with the game-world. Speaking of which: Players explore the world of Masquerada from an isometric point view. Parties of three characters traverse beautifully drawn and colourful 2D backgrounds with their 3D characters. Unfortunately, there is not much to do other than exploring, talking and fighting. There are some hidden bonuses but most of the world is not very interactive. It might be better to think of the game as a visual novel with some exploration, light RPG elements and fighting.

In my opinion, the fighting is Masquerada’s biggest flaw. Players will face a lot of battles with different types of enemies and even a few challenging boss fights. Conflicts happen in real time but the action can be paused to give commands. All party members have different special abilities and an elemental tag system requires tactics. Unfortunately, none of this works. Fighting in Masquerada is chaotic. The AI is mostly erratic and does not follow orders. Too many effects from special abilities make it difficult to overview the battleground. Luckily there is a difficulty mode called “Story Mode” that allows players to enjoy the story without being hassled by the frustrating fights. It came to my mind that a turn based fighting system would have been so much better for this game.

Masquerada: Songs and Shadows should be played for its captivating story and rich lore. Players should not be afraid of reading, as there is a lot of background information hidden in texts. The game’s setting is unusual and has many ties to the cultural diversity and politics of Singapore, the home country of developer studio Witching Hour. Players should not expect a classic RPG experience such as Baldur’s Gate or Dragon Age, but a fairly linear, extremely well written and designed adventure. The epilogue of the game suggests more adventures for Cicero and his friends and hopefully, I’ll be able to return to the world of Ombre in the future.

Masquerada: Songs and Shadows is available for PCs on Steam / GOG / Humble. There are plans to release the game on PS4 in 2017.

Full disclosure: This article is based on a free review key from Witching Hour Studio that I thankfully received upon request.