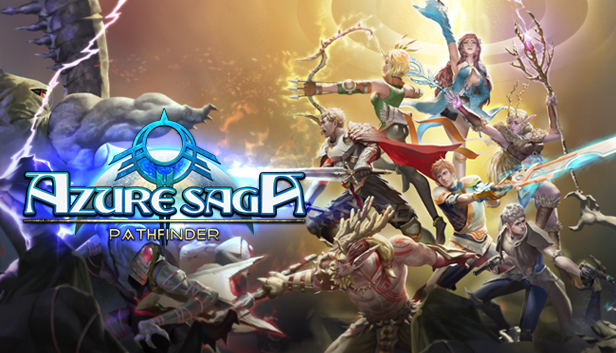 Nostalgia. That’s what obviously comes to mind when talking about Azure Saga: Pathfinder, the new game of Indonesian developer Masshive Media. It is in most of its aspects a trip down memory lane, reminding of classic Japanese role-playing games. The developers tried to transfer the classic feel of those story-driven games with turn-based combat into a modern costume. That seems to be a trend now, as we have seen other attempts by Southeast Asian studios such as WanderJahR or Legrand Legacy.

Azure Saga mixes Sci-Fi elements with high fantasy and tells the story of Synch, a space traveler who tries to find his lost father, who himself was looking for a new home for his people after their planet suffered terrible destruction. Synch and his companion droid Noide crash on an unknown planet and will soon discover that something weird is going on there. The game unfolds in a surprisingly deep story about the balance between science and tradition and and, despite being completely linear, comes with some more or less predictable story twists.

Synch and Noide encounter other characters on their journey which will soon accompany them on their quest to save the world. Being party members, those mostly like-able individuals cover the usual JRPG tropes with knights in shiny armors, rogue rebels and natives with magic powers, taking party roles such as tank, damage dealer and healer. While the character design is mostly solid standard RPG style, this comes also with a drawback: all female characters are portrayed in overly sexualized costumes. An unpleasant reminiscence of the past that developers should overcome in the year 2018.

Battles in Azure Saga are turn-based and offering you the choice to bring three party members into battle. Each have their own special abilities allowing for a varied and challenging combat experience. Attacks charge a combo meter for even more impressive special attacks. The game adds a special variation to the gameplay called united skills. By finding out a combination of skills, players can unlock powerful combat attacks that can easily turn the tides. While the battles are challenging and need a very tactical approach, especially against bosses, they also come way to often. This is another drawback from classic JRPGs: random encounters.

The game looks beautiful in its drawn 2.5D environments and dungeons and 2D battles and dialogues. This colorful world deserves to be explored and offers a lot of secrets and side quests. Unfortunately, this can involve heavy backtracking and with the aforementioned random encounters, exploring the world is unnecessarily tedious at times.

Character development in Azure Saga is kept very simple, as your party develops their skills automatically. Yet, players can equip them with powerful trinkets and even has a jewelry crafting system. Surprisingly, this system is introduced to the player at a very late stage of the game, such as other customization systems a like magic tattoos. While this might be a decision not to overburden the player with options at the beginning, we would have loved to play around with it much earlier.

Azure Saga is an ambitious project for a small Indonesian game studio like Masshive. Yet, they succeeded at delivering a very polished and by times even captivating JRPG experience. The 20-hour-long story is entertaining, the graphics are beyond criticism and the gameplay is diverse enough to push players forward to the end. If you want to explore everything in the game, be sure to free up some space in your gaming schedule! In the end, we wished that some features such as the crafting system would have had a more direct effect on the gameplay and some annoying aspects of classic JRPGs such as random encounters would have received a modern overhaul. If this doesn’t bother you, Azure Saga is worth a trip into nostalgia.

Azure Saga: Pathfinder is available on Steam for PC on Windows and Mac. This review is based on a review copy kindly offered by the developers.