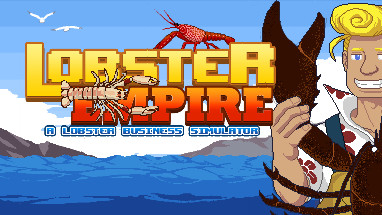 Lobster Empire is already the third game released by Indonesian studio Maulidan Games within one year. Claiming to become the fastest video game developer, the team based in Surabaya aims at releasing more games in a shorter period than conventional studios of the same level. After a detour into the RPG-Genre, they return to the studio’s origins with Lobster Empire: tycoon games. In this review, we will check whether increased development speed comes at the cost of quality.

Lobster fishing is a dangerous yet profitable profession that has not often been covered in video games. Lobster Empire wants to close that gap by presenting us a management game about fishing lobsters embedded in a story-line about some run-down fishing company on the way to new heights. Set in a semi-realistic US-American environment, we guide our fishermen (yes, only men …) through five eras. Although mainly a tycoon game, it still follows a light story path that is basically used to introduce new milestones such as equipment or other gameplay options.

In Lobster Empire, we hire and train lobstermen to send them on fishing missions. Boats of different sizes are at our disposal to carry them into the various fishing grounds while we consider the amount of fuel, traps or gadgets such as weather alarms they need to bring on their missions. As mentioned above, fishing is dangerous, so a range of events can happen during the trips: Storms, broken engine, sickness or the ability to take a shortcut. In case of events, players get the chance to make a decision and face the consequences. Lobstermen can be trained to increase their stats using experience they gained on fishing trips. Fisherman with higher health is for example less likely to get sick, avoiding instant mission abandonment.

One of the real problems of lobster fishing is overfishing the grounds and its fatal impact on the environment and lobster populations. The game tries to represent these problems through decreasing revenue and severe punishments by the authorities. Yet, lobster fishing is first of all represented as a great opportunity for making money. The developers wasted a chance to give a deeper commentary on the fishing business itself.

While again delivering a more improved and enjoyable game (the pixel art visuals are cute and the gameplay motivating), Maulidan Games fails again to avoid repetitive actions in the long run. Players will too often encounter the same events and fishing is merely automatic with little interaction. Lobster Empire’s questing system is so linear, and it allows only one way to progress. So, the game feels less like a real management game but like a puzzle in which players must find the one and only correct approach to reach the goal intended by the developers. The missing fast-forward option slows down the game pace and makes it even more bothersome to progress.

In the end, Maulidan Games accomplished impressive results considering the short development period. The game looks beautiful with its bright colors and explores a yet not so popular setting from various perspectives and wraps it in a solid mechanic. Still, it feels like a wasted potential and the developers should have spent more time in play-testing and optimizing the game in the long run. Considering the studio’s mantra in game development, one might still answer that quality comes over quantity …

Lobster Empire is available on Steam for PC. This review is based on a free review key kindly offered by the developers.