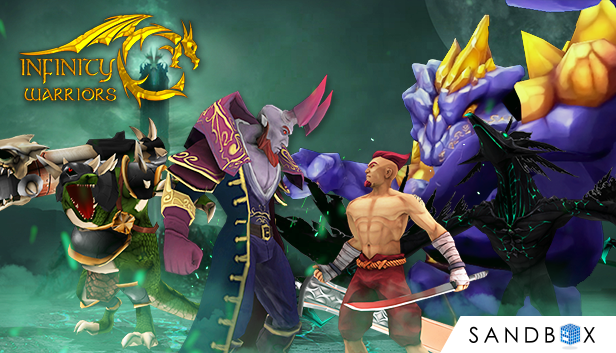 The Demon King must die. That is all I desire. I am the nameless Swordsman, master of all martial arts and almost god-like fighter. Killing the Demon King will grant me eternal life… But the path to immortality is plastered with deaths. Expect to die a lot!

Infinity Warriors, developed by Thai studio Sandbox Global, is a brawler game for mobile devices with one-touch controls and heavy focus on grinding. It starts with the encounter between the Swordsman and the Demon King. Players will soon discover that they stand no chance against him and will die quickly and un-heroically. From that moment on, after each death the hero will resurrect magically and face the evil master again. And again. And again…

Repetition and grind is a key element in Infinity Warriors. To face the Demon King, players must traverse three visually different and sidescrolling areas: Mystic Woods, Crystal Caves and Hell Gate Tower. In each world, the Swordsman fights two waves of enemies and a boss at the end of the level. By doing this, he increases his skills, loots powerful items and earns golden coins. Each playthrough makes the hero stronger and weakens the final boss. In addition, the so-called Oblivion Rift is an arena of ever-spawning waves of enemies, perfect for grinding experience points and chasing highscores.

The battle system is incredibly simple: just tap to hit the monsters with your sword or tap and hold to jump. While this sounds boring at first, it is incredibly satisfying to unleash powerful combos in such an easy manner. At the beginning, most critters are easy to fight and don’t require much tactics. But with increasing playthroughs the enemies become stronger and dodging and timing becomes much more important, especially when it comes to boss fights.

Infinity Warriors offers a loot and crafting system as well. Full armour can be found in reward crates and upgraded using coins. This adds nicely to the gameplay but is not deep enough to keep you craving for better loot. Most visually stunning and effective are the powerful spells that can be unleashed using magic rings.

Overall, Infinity Warriors is a surprisingly fun game that may make your fingers hurt after a while! The simplicity of the battle system, which is perfect for smartphones, makes up for the dull background story that could make much more out of its death-circle theme. Infinity Warriors is a visually appealing power fantasy that gives players the feeling of becoming stronger and stronger with each playthrough, a system well-known from the Souls-Borne games or rogue-likes. Unfortunately, the game has some balancing issues: two out of the four bosses are too easy to fight and don’t require more than simple “button”-mashing: wasted potential! In the end, there could be more content and less repetition but the game mechanics work and once you see the satisfying finisher moves after a boss fight, you’ll forget about it and face your next death to start again. The Demon King must die!

Infinity Warriors is available for free (Free-to-Play with ads and in-game purchases) on Android and iOS.